My mom told me that creating the freezer meals was my way of "nesting" and that I would go into labor within 24 hours. That was 8pm, at 5am on my water broke.

Nine months of planning, prepping, reading and obsessing could not have prepared me for the act of child birth. And not the contractions (at least before I got the epidural), those weren't terrible. The physical act of pushing a human out of my body was, um, a trip. Here's the scoop.

Laboring from Home
As per usual, I woke up in the waking hours to relieve my bladder. Upon climbing back into bed my water broke (yes at nine months pregnant the simple act of getting into bed becomes a climb). I don't know what it's like for other women, but my water gushed out of me for what felt like 5 minutes. I quickly notified Hubby of my - um - situation, then sprinted to the shower and stood in labor purgatory for several minutes while Hubby awkwardly stared at me.

"Oh my god, we're having a baby today," I squeaked.

Hubby and I readied ourselves and headed to the hospital.

"The next time we come home, we'll have R with us," he proclaimed as we watched our house fade away. 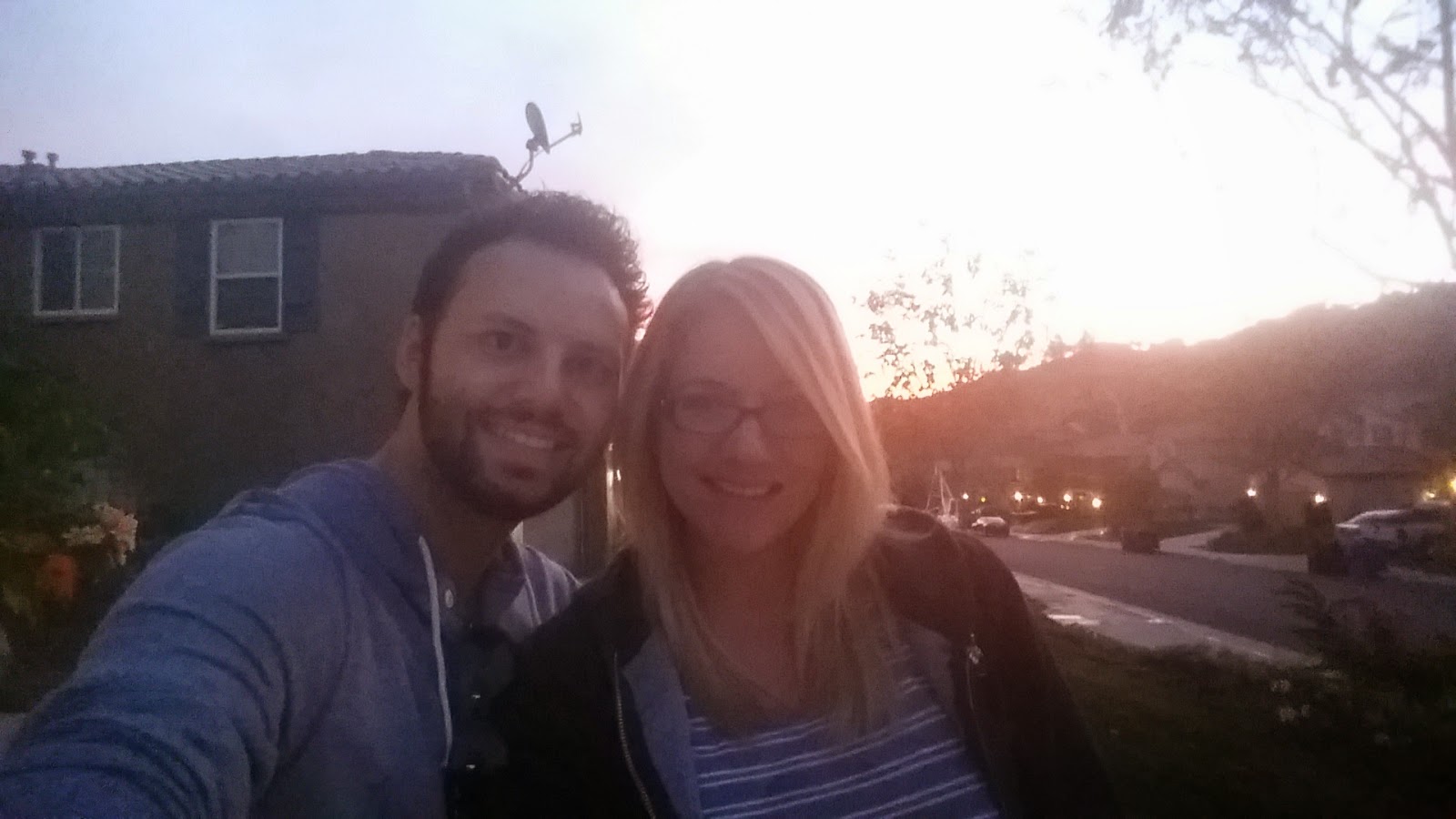 Yes, I insisted we take a selfie before driving to the hospital...

At this time, we were crazy excited for the labor, primarily because I was in no pain. Upon arrival, I was examined by a nurse.

"Um hmmm, let me examine you."

Now, I'm not one to complain of discomfort but the physical act of checking dilation is one of the more painful memories of the labor experience. Let's just say that nurse knows me better than my husband now...

"I'm not entirely convinced your water broke," she stated after the examination. With my shock painted all over my face, I disagreed.

The nurse performed five swab tests. One after the other. Each one returned negative.

"Do you want to see my soaked underwear for me to prove it?" I asked. The nurse stared at me. Not one of my prouder moments.

"Since there's no evidence your water broke and you're not experiencing any contractions, we have to discharge you."

And with that, we were sent home with the instructions that if labor began not to return until contractions were 5 minutes apart, 60 seconds long, for at least 2 hours.

Hubby, sensing my disappointment, treated me to our favorite breakfast joint. Needless to say, I was so crushed I sufficiently cried all over my breakfast. Not only would I not be meeting my R, but I felt like a fool. How could I not know the difference between pee and the bag of water?

No. I was not crazy. I was right. My water broke, dammit.

Upon driving back home, I suddenly felt a twinge in my abdomen and lower back -- nearly 6 hours after my water broke. Back labor was expected since I've never experienced a period cramp rather lower back pain. But was this a contraction? I opened my contraction tracker app and documented the contraction.

Yes. Yes, it was a contraction. I wound up laboring from home for 10 hours before I hit that magical "5 minute apart for at least 2 hours" number. But that's ok, because that gave Hubby and I the chance to binge watch the final season of Boardwalk Empire. I also sufficiently shocked my neighbor when, upon meeting us on a walk, he asked when I was due and I replied that I was currently in labor (while having a contraction.)

When we finally returned to the hospital that evening, the nurse during her dilation examination popped her head up suddenly and proclaimed, "I think your water already broke!"

Laboring in the Hospital 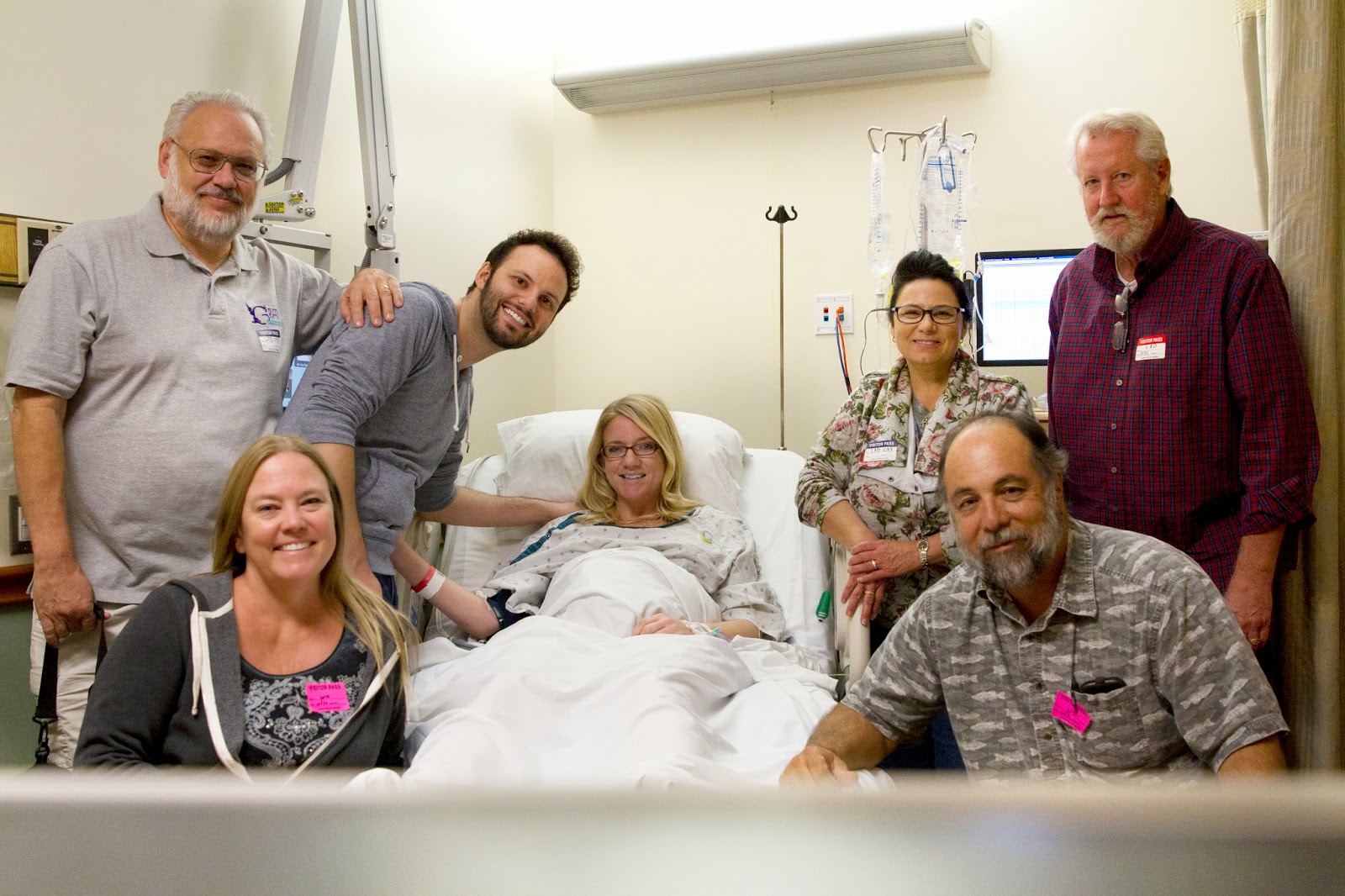 Us and the family. Yes, I curled my hair before returning to the hospital...

So any way, we got set up in our room. At that point the pain was still not unbearable. I was fine hanging out and talking with my family for three hours.

Then, suddenly, around eleven at night the pain became intense.


And I mean so intense that I started violently shaking during each contraction. And that, my friends, is when I opted for an epidural.

Anyway, relief came immediately after administering the epidural-- but too much relief. Suddenly, not only didn't I feel numb, but also nauseous and on the verge of passing out.

"I feel like I'm going to throw up," I stated. The shocked nurse threw her gaze to my blood pressure which had dropped by nearly half. In a scramble, they administered a drug that stabilized me. Few!

"You can push this button to administer more pain medication," the nurse paused, "but since it effects your blood pressure negatively, don't push it unless a nurse or doctor is present."

"Alright, now we'll leave you to get some rest."

Although it was nearly 2am, Hubby and I could not relax. We pulled out our Ipad and searched Netflix for some entertainment. It only seemed fitting to watch A Nightmare Before Christmas, since it was that season after all.

Hubby was eventually able to fall asleep (somehow) on a makeshift bed of hospital chairs, but I was not able to sleep. Call it anticipation or anxiety, my mind would not rest.

Time passed quickly, and suddenly it was morning and I was 8 cm dilated and I hadn't pushed the epidural button at all... well crap! At that point, there was no point in pushing it.

"Let us know when you feel the urge to push," said the nurse.

The pain worsened and worsened - very quickly-- and, what felt like only 5 minutes later, I declared I needed to push. Hubby and I pushed the button several times, but, at that point, the epidural was useless.

The Push
I got into position. And, this may shock the men reading this, but Hubby helped hold my leg in place. This means, yes, he witnessed everything. I know most men claim the smartest thing they ever did was to remain behind the shoulder during birth. But my guy says watching his baby girl come into this world was the most incredible thing he's ever seen. "Euphoric" is how he described it. I'll admit, Hubby was amazing throughout the entire experience, but this act meant the most to me.

At this point, I had been in labor for nearly 23 hours and was running on no sleep. I had heard that pushing could last 15 minutes or 2 hours... let's just say I was determined to land closer to 15 minutes on that scale. So I may have pushed harder and longer than advised. Here's a picture of my pushing. My mom said I was grunting like a crazy person. Oh well, I got her out in less than 30 minutes :) 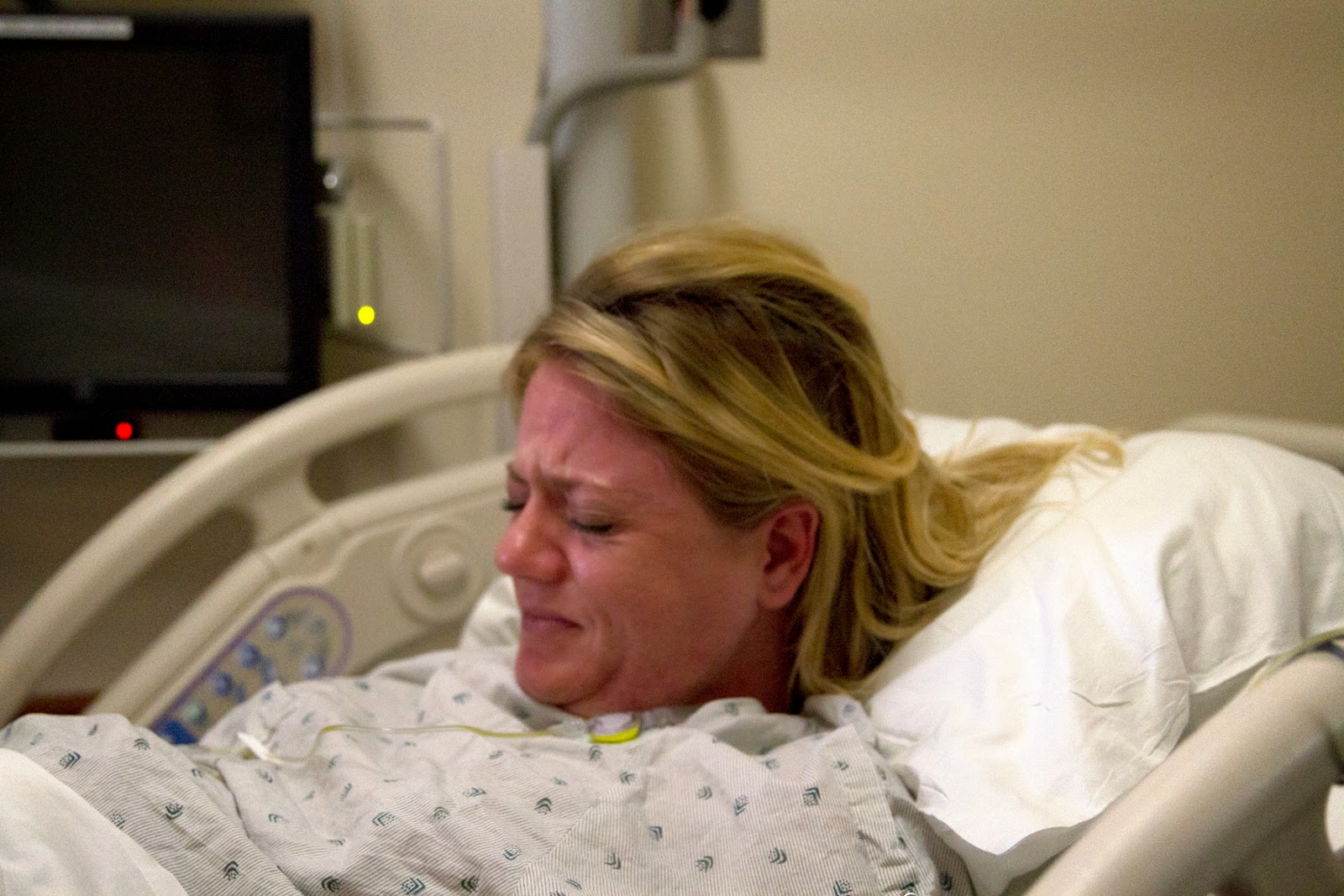 Apparently my push face is me with a double chin and a tomato complexion.

The Landing!
R was born! She was 7lbs 8oz and 20 inches long. Sure, it was intense. Sure, it was painful. Sure, it felt impossible. The moment I pushed her out and she landed on my chest, everything melted away. She was heaven in my arms. I've never loved anything more than holding my baby for the first time. She was the most beautiful being and I had just pushed her out of me. I had lovingly sacrificed my body, and at times my sanity, to create this screaming baby. If there is a heaven, I hope mine is experiencing that moment for all eternity. 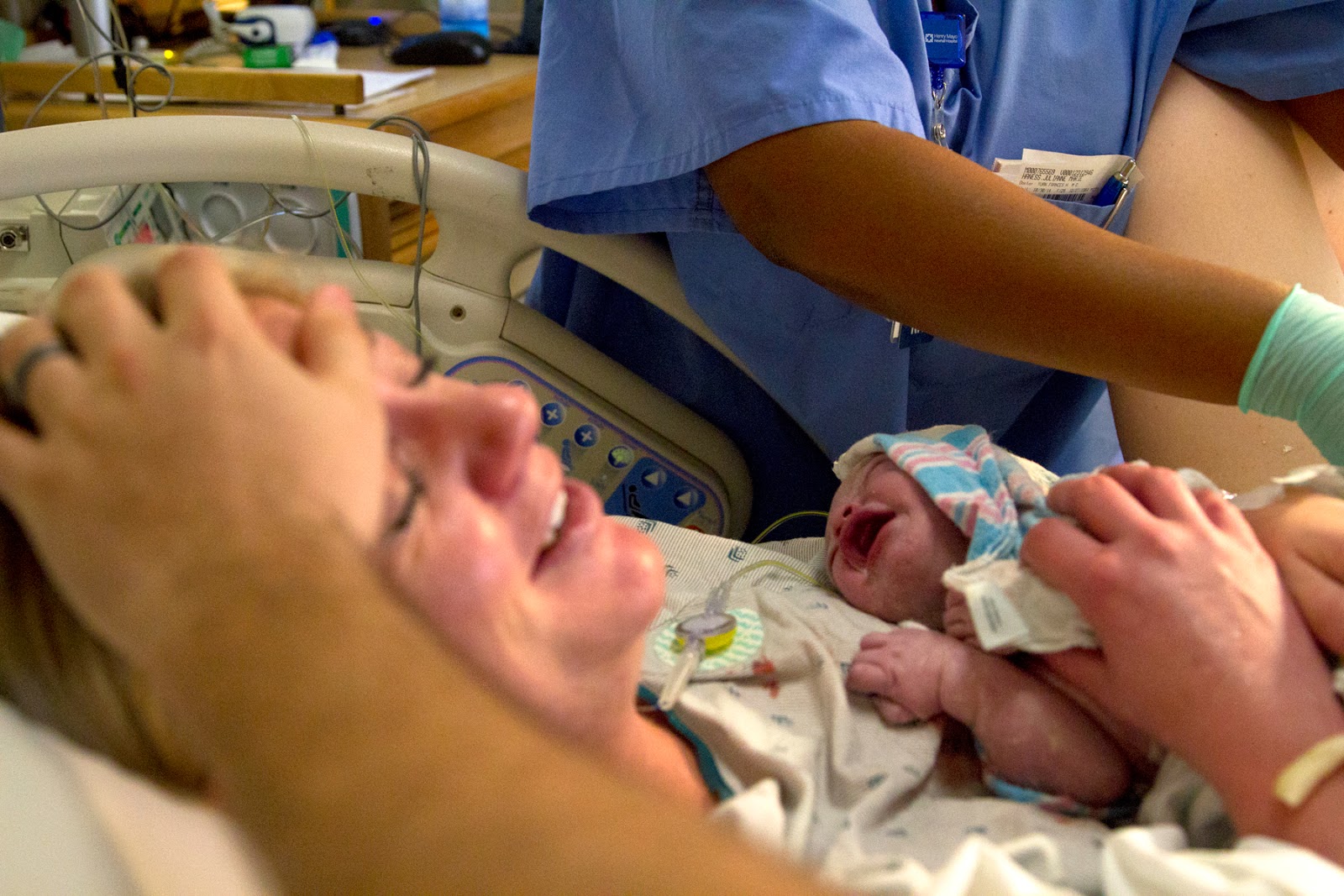 My first moments with the two most important people in my life, Hubby and R :)

The Baby
So now R has been in our lives for almost 7 weeks and it's taken just as long to post this. Caring for an infant is no joke :)  I'm a first time mom and she's a first time baby, so we took our time figuring it all out. And now that both she and I are in a groove, I'm hoping to post regularly again. So here's to , the most painful, frustrating, bloody, and beautiful thing I've ever done.