Julianne is a lifelong aspiring writer who finally decided to stop aspiring and start a blog. She's fueled by her love of writing, creating and coffee. She holds a bachelor's degree in Creative Writing with a minor in English from UC Riverside and a Master's in Library Science from University of North Texas (though she's never been to Texas.) She's happily married to her Hubby, who she met in high school and who turned down her invitation to prom. Together they have two rambunctious young kids, a stinky old dog and a desert tortoise named Lisa Turtle, who is both male and not a turtle.

She considers herself a talented writer because she won first prize in a writing competition in first grade, nearly 30 years ago. Her story involved a captive Princess who was forced to eat Brussels Sprouts while awaiting a knight in shining armor. The Princess eventually just saved herself.

She enjoys creating artwork, crafts, and stringing words together in a semi-coherent fashion.

Here's a glamorous photo of Julianne vacationing in Hawaii earlier this year, but know that she's about to go hang her laundry on a line in the backyard because her dryer broken. #momlife 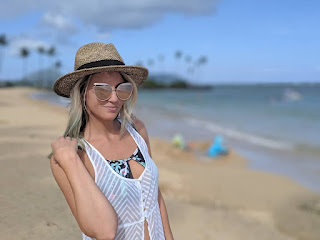