Our getaway to San Diego has arrived! And now it's already gone...

But luckily I took far too many pictures for any sane person (a trait I must have inherited from my mom...) So without further ado, I will outline our fabulous vacation!

For a few years now, we've heard nothing but rave reviews for The W Hotel chain. Googling pictures of the hotel did nothing but fuel the flames since the typical googled picture would be of the common area in the hotel. Which looks like this: 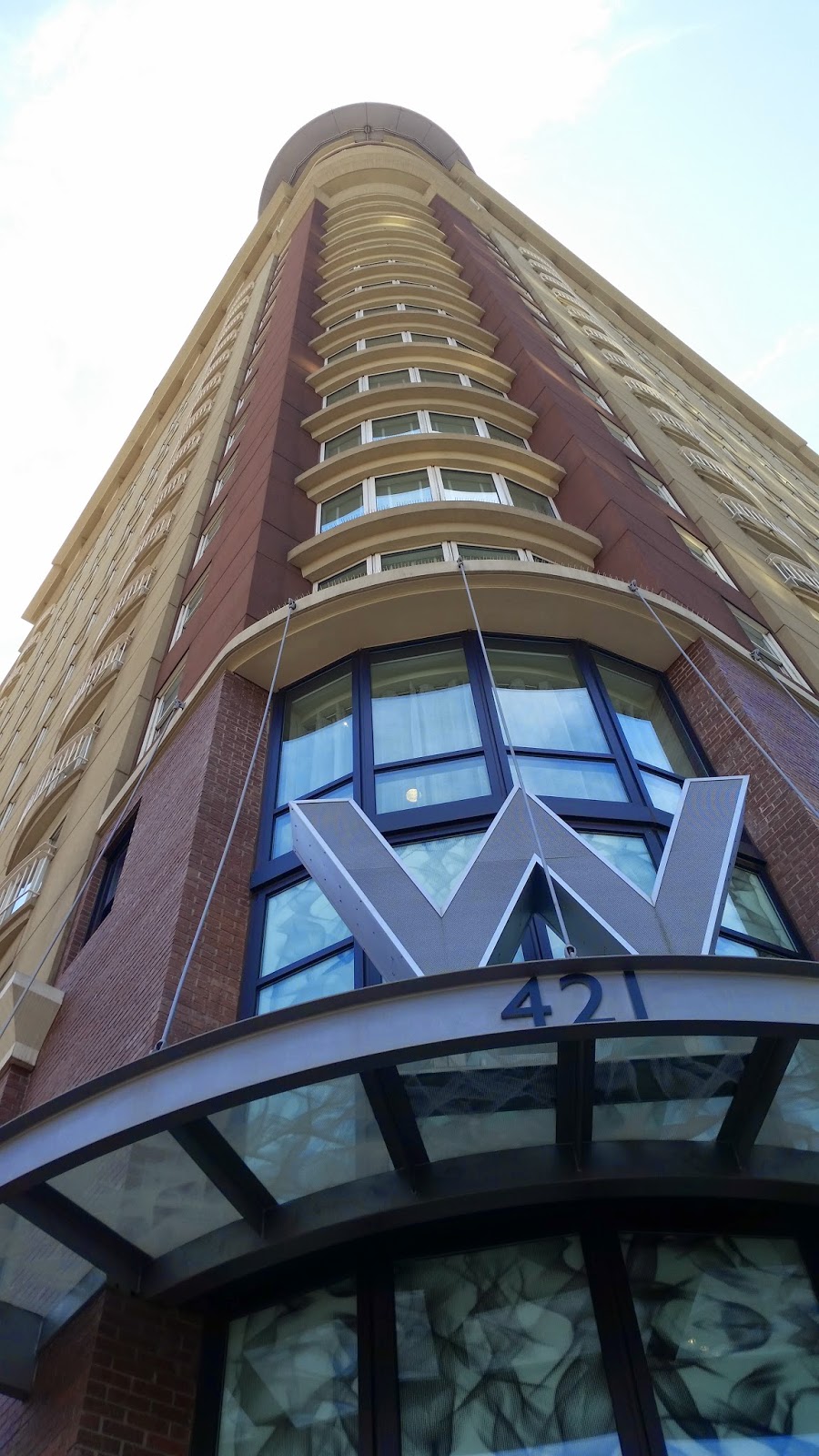 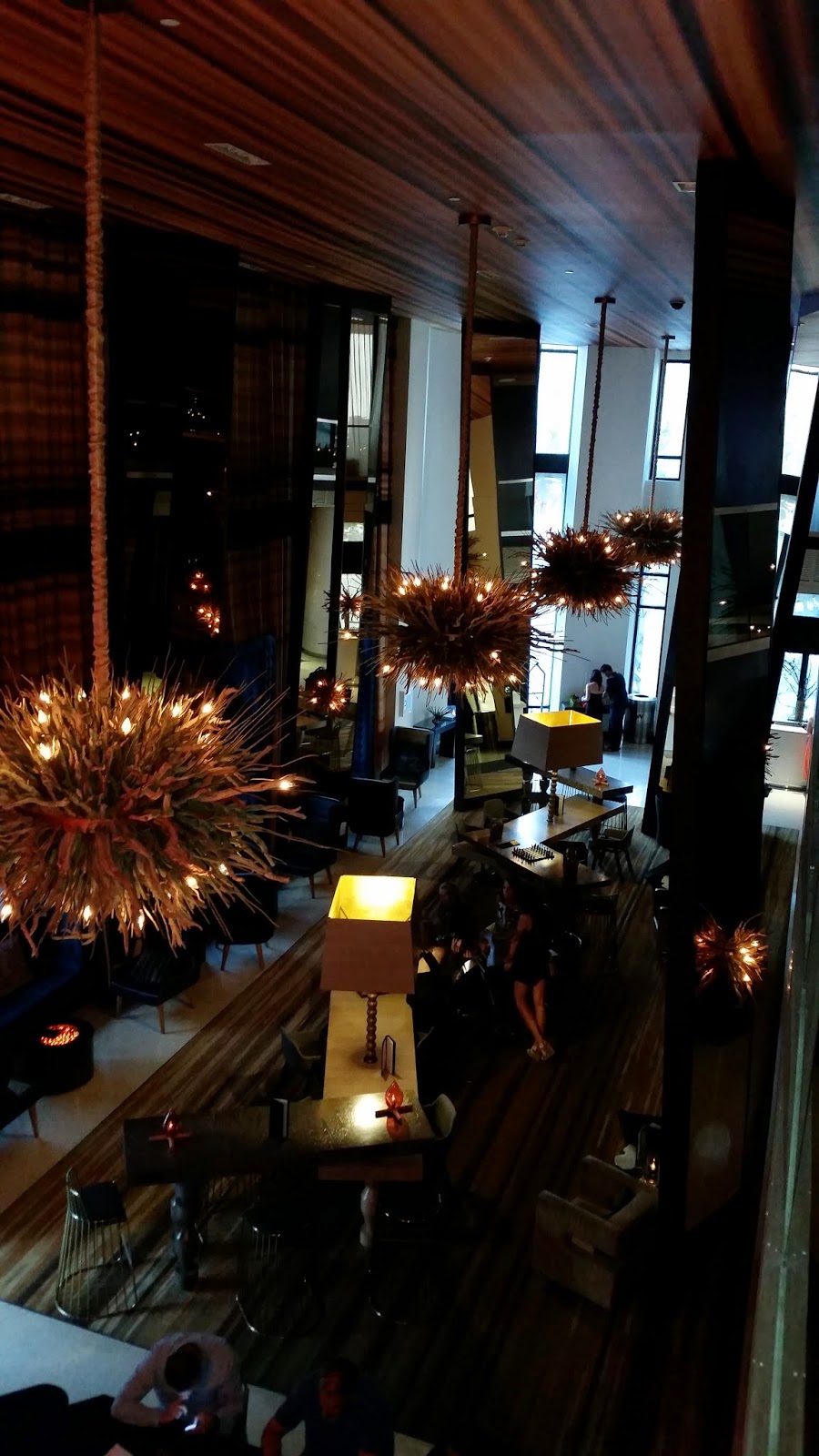 As you can imagine, we were expecting a cool, hip hotel. I even told Hubby as we were booking, "I want to stay at the W so I can feel special the whole time we're there."

Well, hate to disappoint the legions of W Hotel fans out there. But the rooms were not all they were cracked up to be. Maybe we're spoiled or set our expectations too high, but we expected slightly more from such a trendy hotel. Little things like no Q-tips in the bathroom, crazy small towels, and less than comfortable pillows all make the "Room for Improvement" list. My main issue was the parking situation. There was no self parking and valet was $40 a day. Less than a block away was a perfectly suitable parking structure for less than half the price that we wound up using. Hubby summed it up best we he said, "When we go on vacation, from now on, let's make sure that the showers are better than our shower. That's my only requirement for hotels."

The Food
I can't express how much I absolutely enjoyed the food in San Diego. We went to several places, including the Karl Strauss Brewery, Cafe 21, Seersucker and the Hash House A Go Go. Both the Hash House and the Seersucker blew my mind. The Seersucker’s plates were original and delectable, the Hash House's were huge and delicious. If anyone visits Sand Diego any time soon, I highly recommend both of those restaurants. 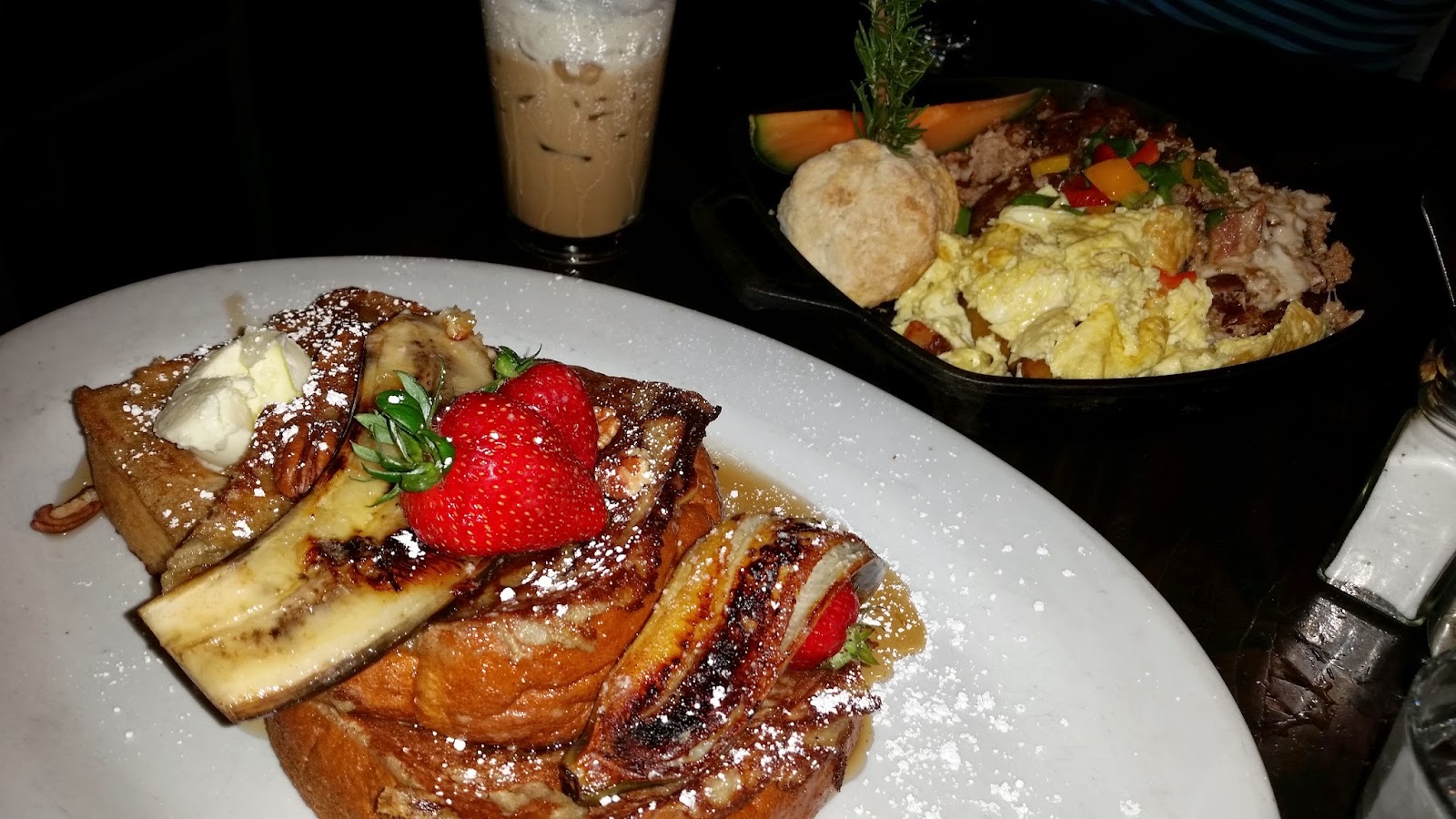 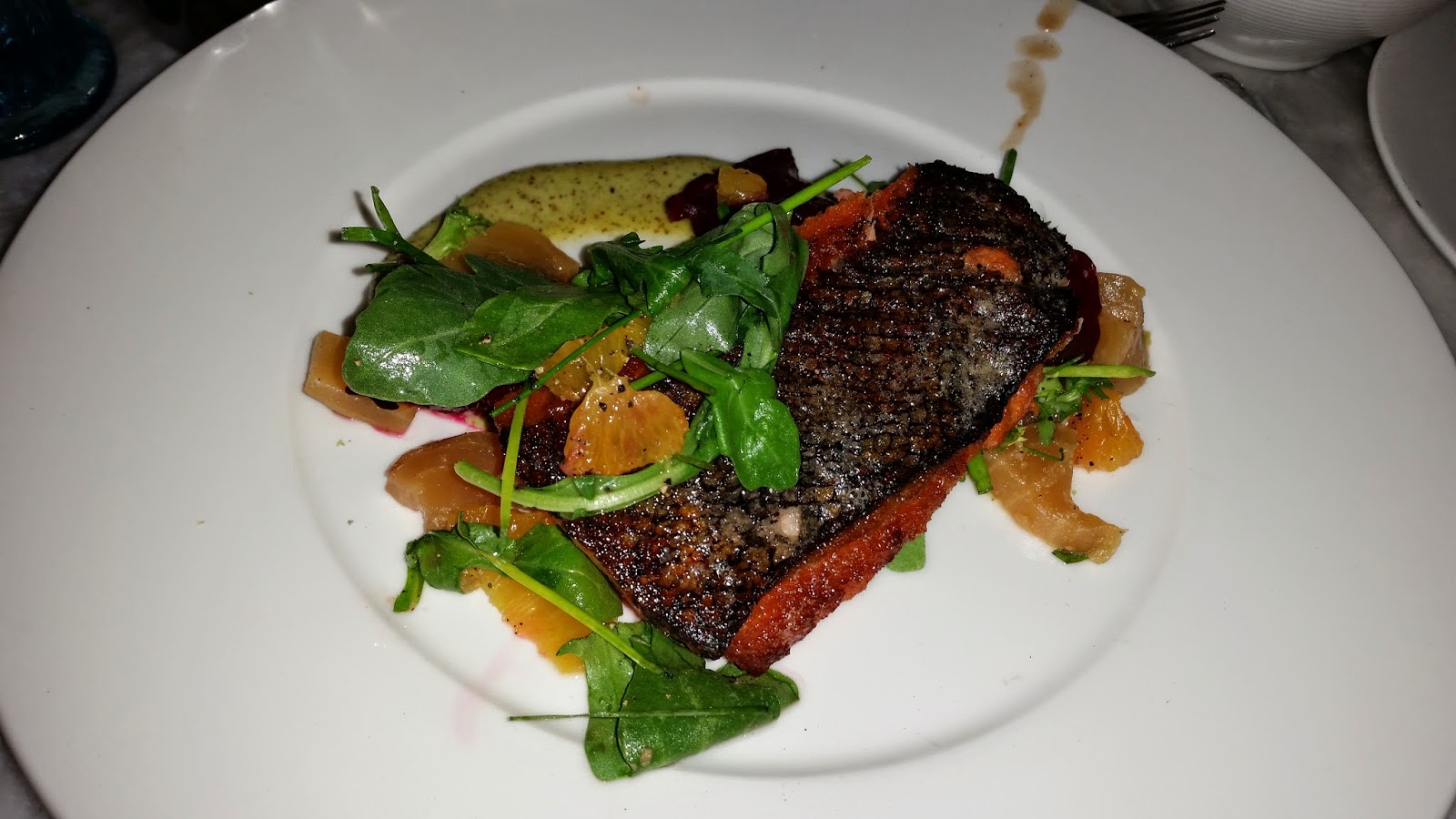 
After enjoying my Salmon plate at the Seersucker, I eagerly said to Hubby, "I haven't had a meal that amazing in a really long time!!!" His response, "I've got to take you out to nice restaurants more often." I'll be dreaming about that meal for quite some time...


The Outings
All though the hotel failed to impress, our outings were AMAZING!

Seaport Village
After a 4 hour drive down which included pit stops to visit my dad, mom and nieces, we were pretty beat. We decided to lay low and visit the harbor then walk around the shops at Seaport Village, a quaint little knick-knack shopping and park area overlooking the harbor. 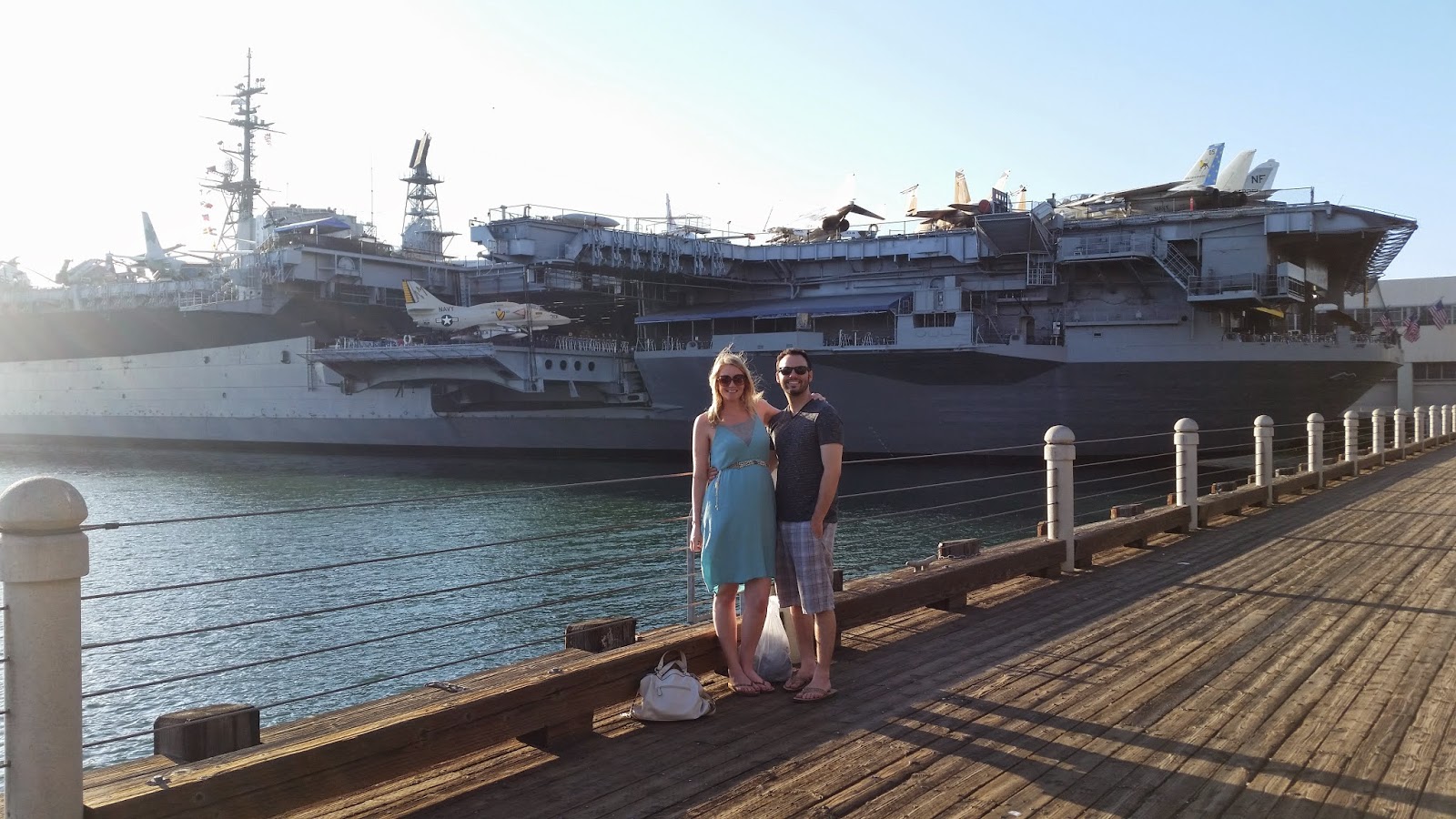 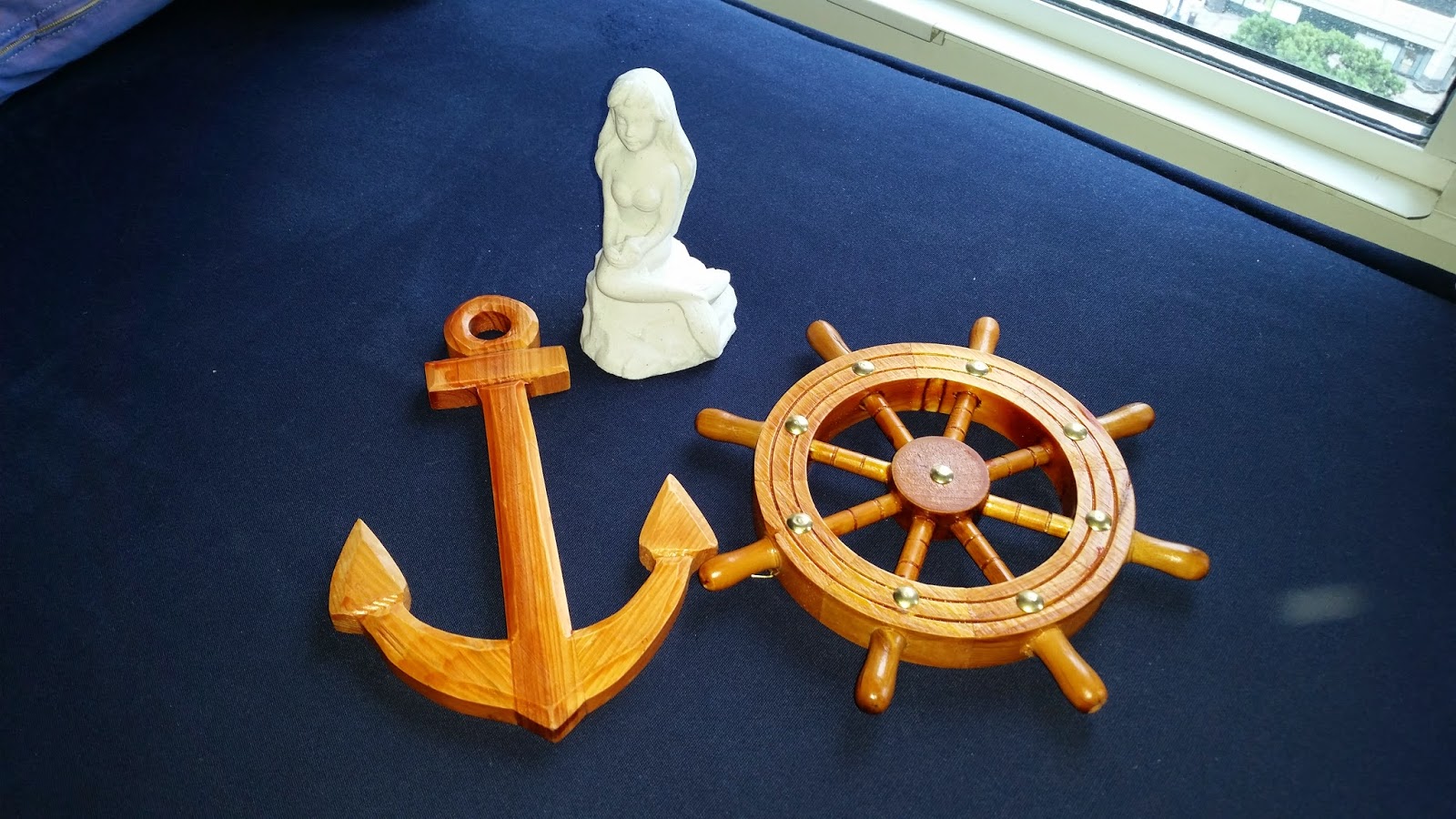 Decor for my Little River's room. (Yes that is a mermaid. I figure I spent a good five years of my life wishing I'd suddenly wake up sporting a fin, so my daughter will most likely do the same.)

The San Diego Zoo
This is by far the most memorable outing of the trip. Not only was there a reasonable amount of Zoo Goers (read: not too crowded) the animals were simply breathtaking! All the animal exhibits were beautiful but below are a few of my favorites: 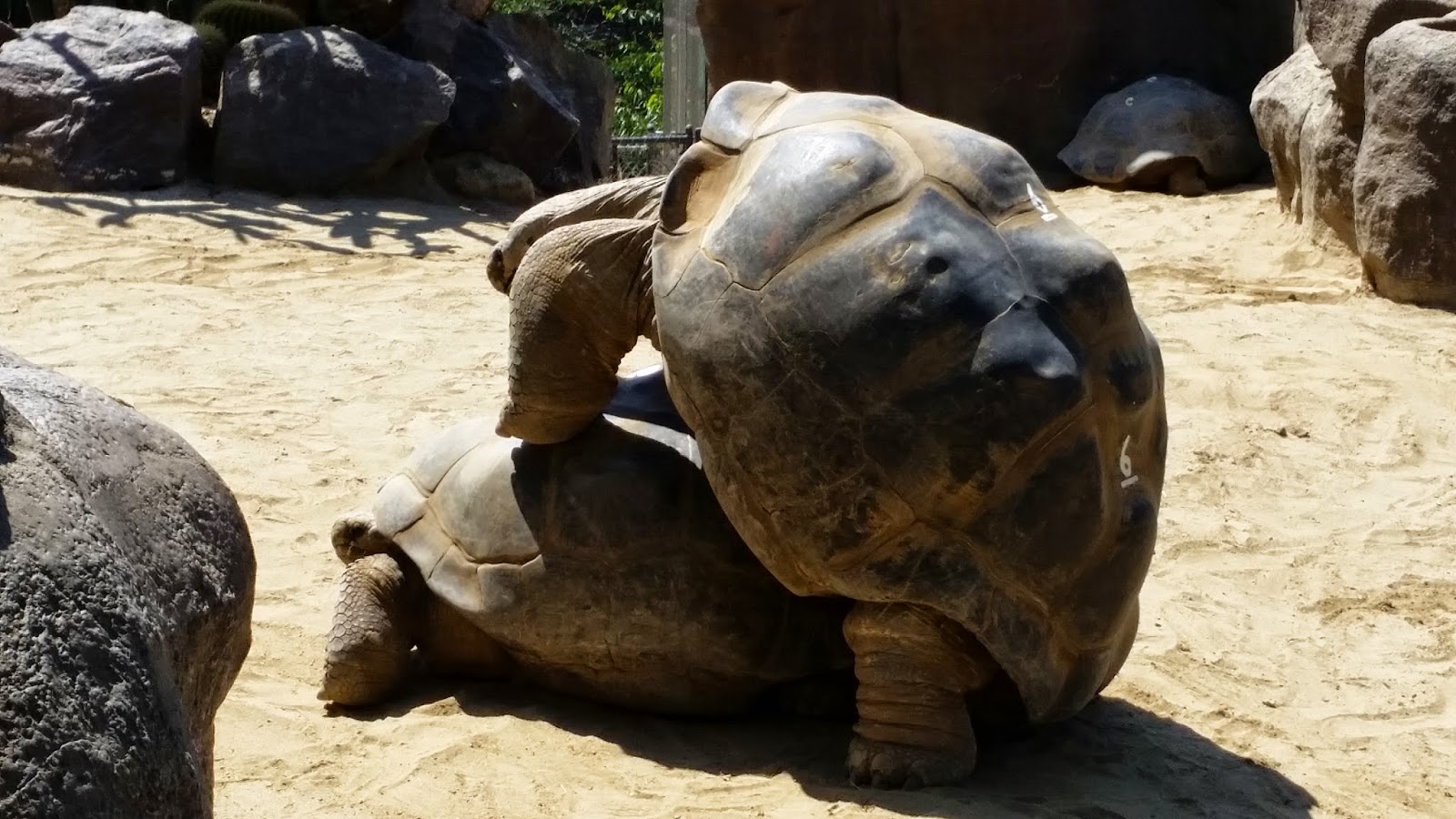 The obligatory humping tortoises, a standard show at any Zoo. This of course lead to a good 10 minute show with a heckling audience. A comment from a young boy in the crowd, "Why is he doing that? Is he stuck?" 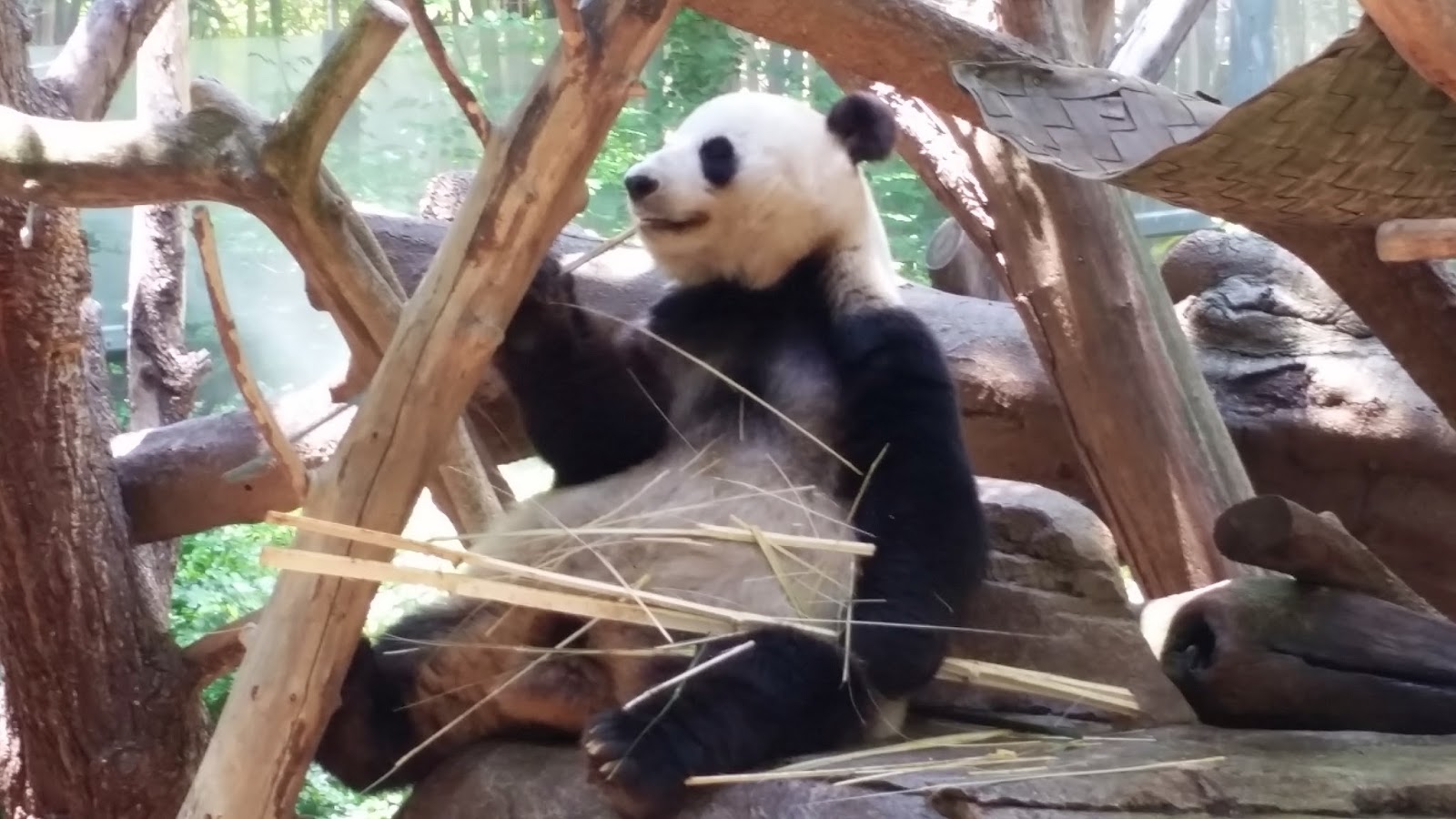 The Pandas. The only animals that warranted a 40 minute wait to see them. So worth it. I'm not sure if they continually eat bamboo throughout the day, but these guys were extremely active the 15 minutes would stood watching them which made for a memorable experience. Beautiful creatures! 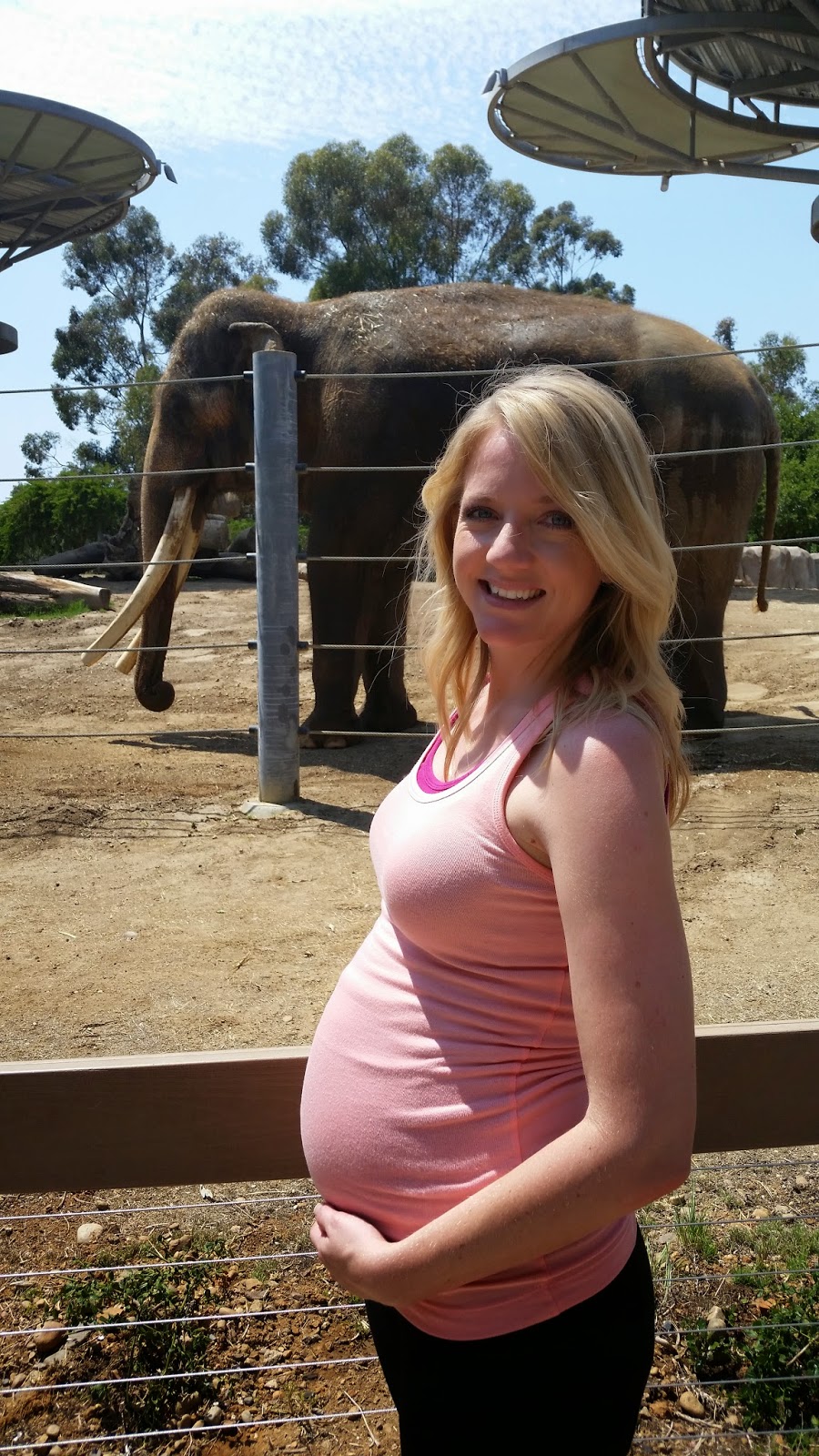 Me and my buddy the elephant. We sat there waiting for him to come out into the open for a while. Then I finally got up and started talking to him. I swear he responded to my voice and walked right over to me. :) The Meerkats. I'm not sure what it is, but meerkats just tickle me. Maybe it's because their mannerisms remind me so much of my own little pooch at home. As we sat there admiring their little ways, their caretaker brought our a box of crickets to devour. I must say, I've never giggled so much in my life.

Sea World
I have been to Sea World numerous times, even Sea World in Florida, but this was by far the most memorable. We started our day with the ticket salesman telling us, "We don't want the coupon" we just handed him, inferring that he will give us a better deal. Then charging us full price. (?) We then set off to the Dolphin Show which was hindered by a packed stadium and crowds of people standing in front of our seats, blocking our view. Then, as if timed perfectly, immediately after the show ended, it started raining cats and dogs. And if anyone has ever been to a stadium, they know it takes a while to shuffle the crowds out of their rows of seats, leaving us entirely exposed to the rain for nearly 15 minutes.

Hubby later told me that if I had showed any desire of leaving at that point, he would have gladly gone. Luckily, I tracked down some super stylish plastic ponchos and stayed the course. The rest of the day was so worth it. 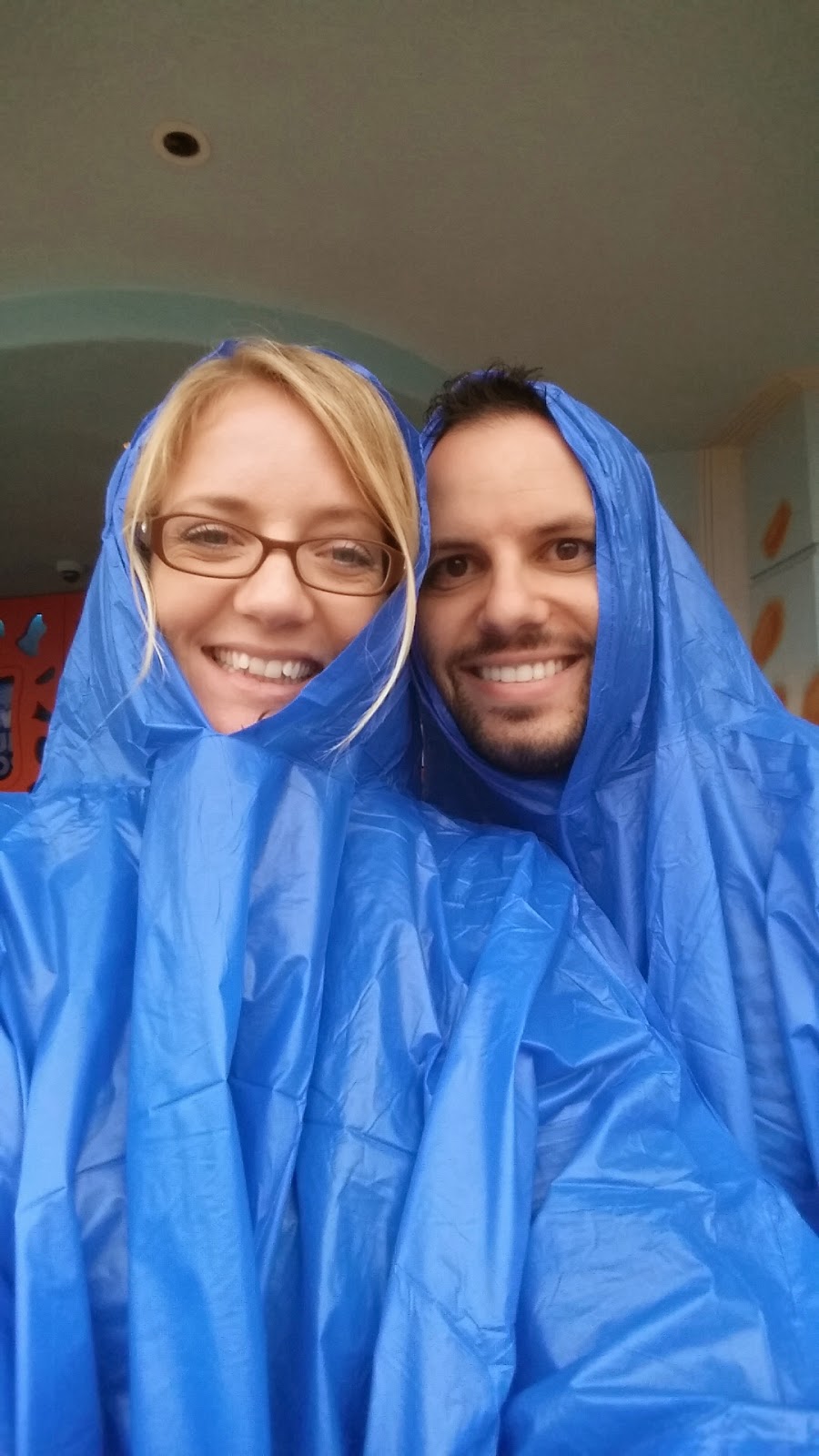 Living it up in our ponchos 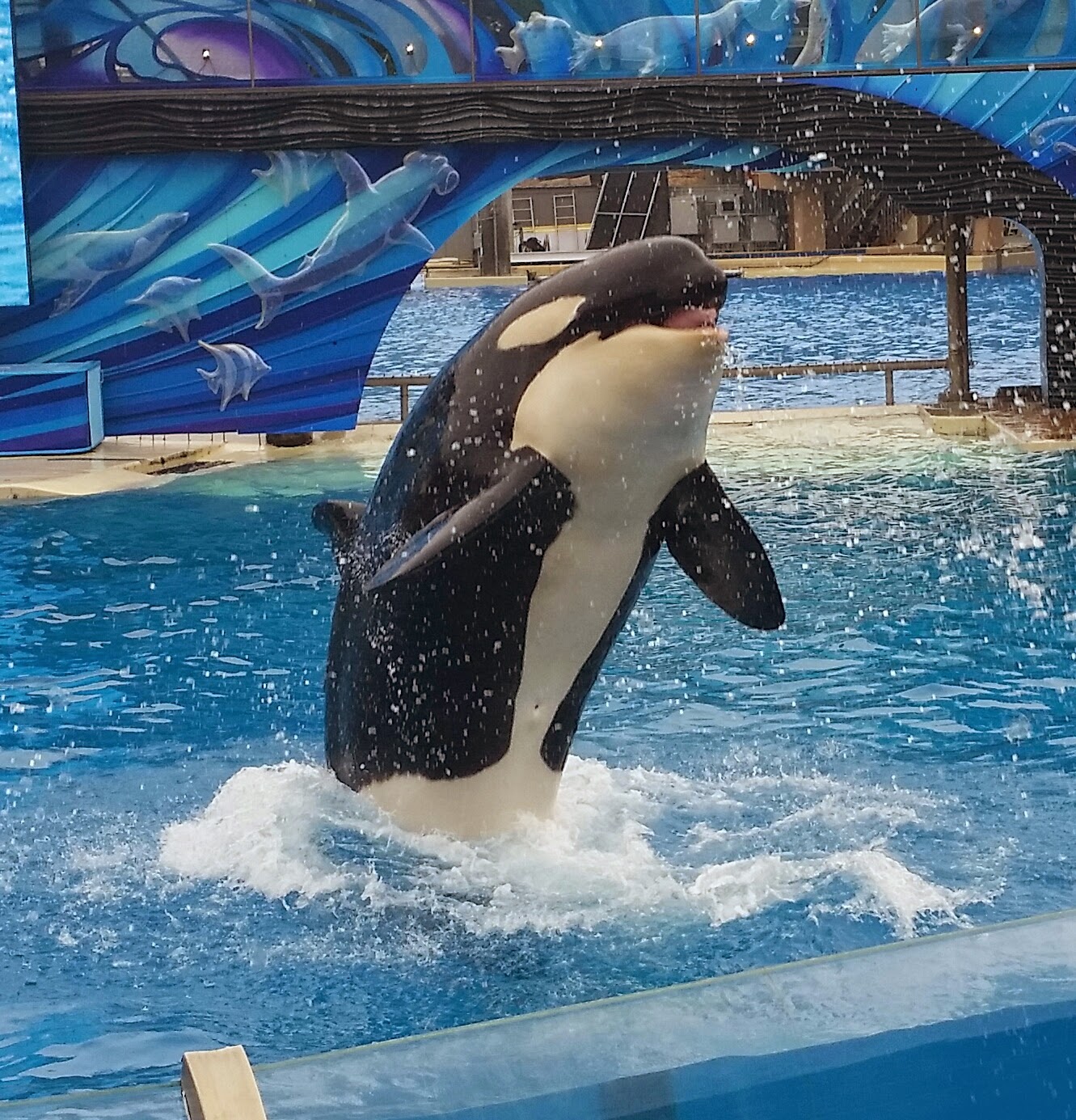 The Killer Whale show had it all! (And we got much better seats :) 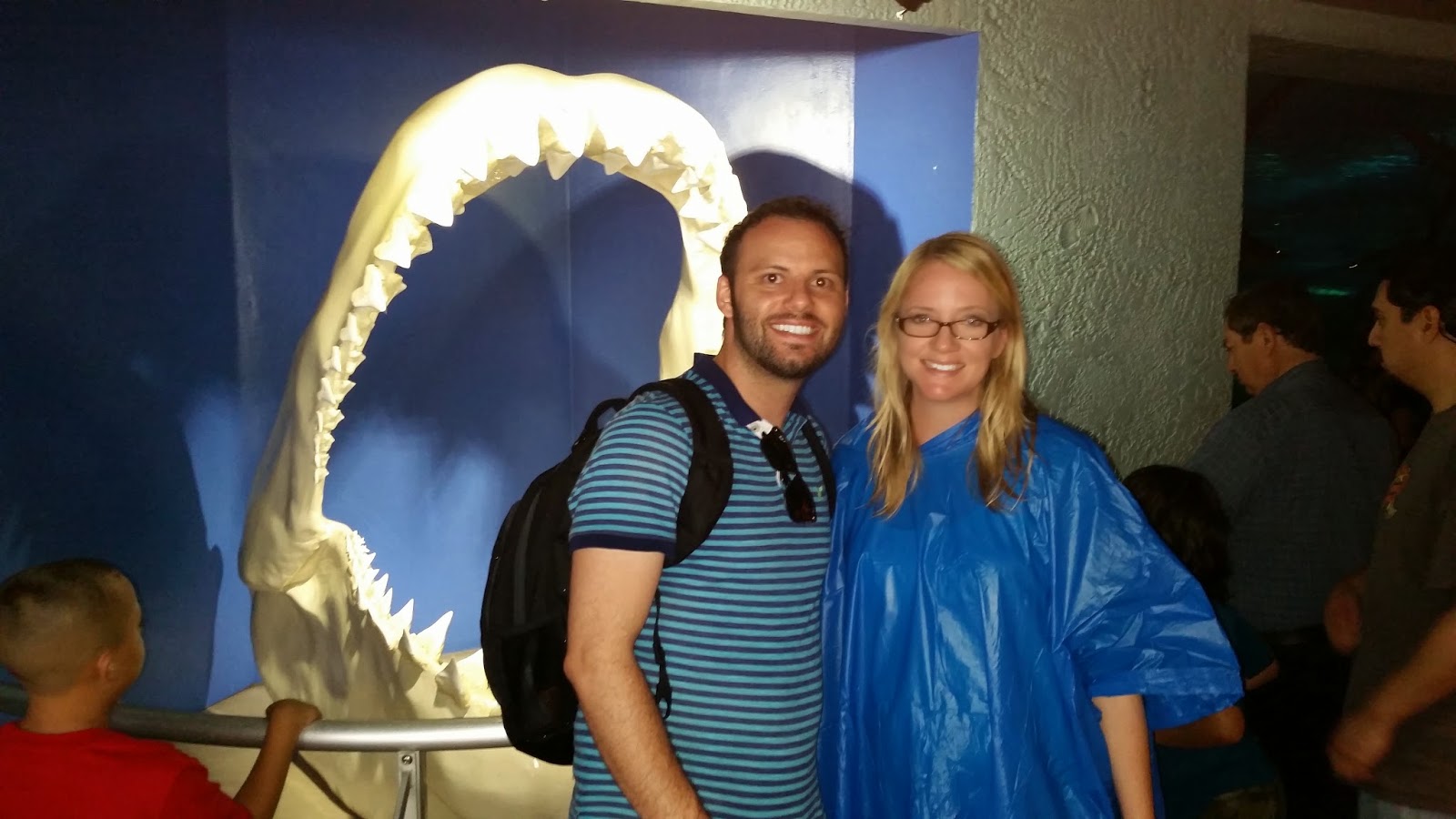 The Shark Exhibit. We left wondering why the entire exhibit wasn't just that awesome tunnel... 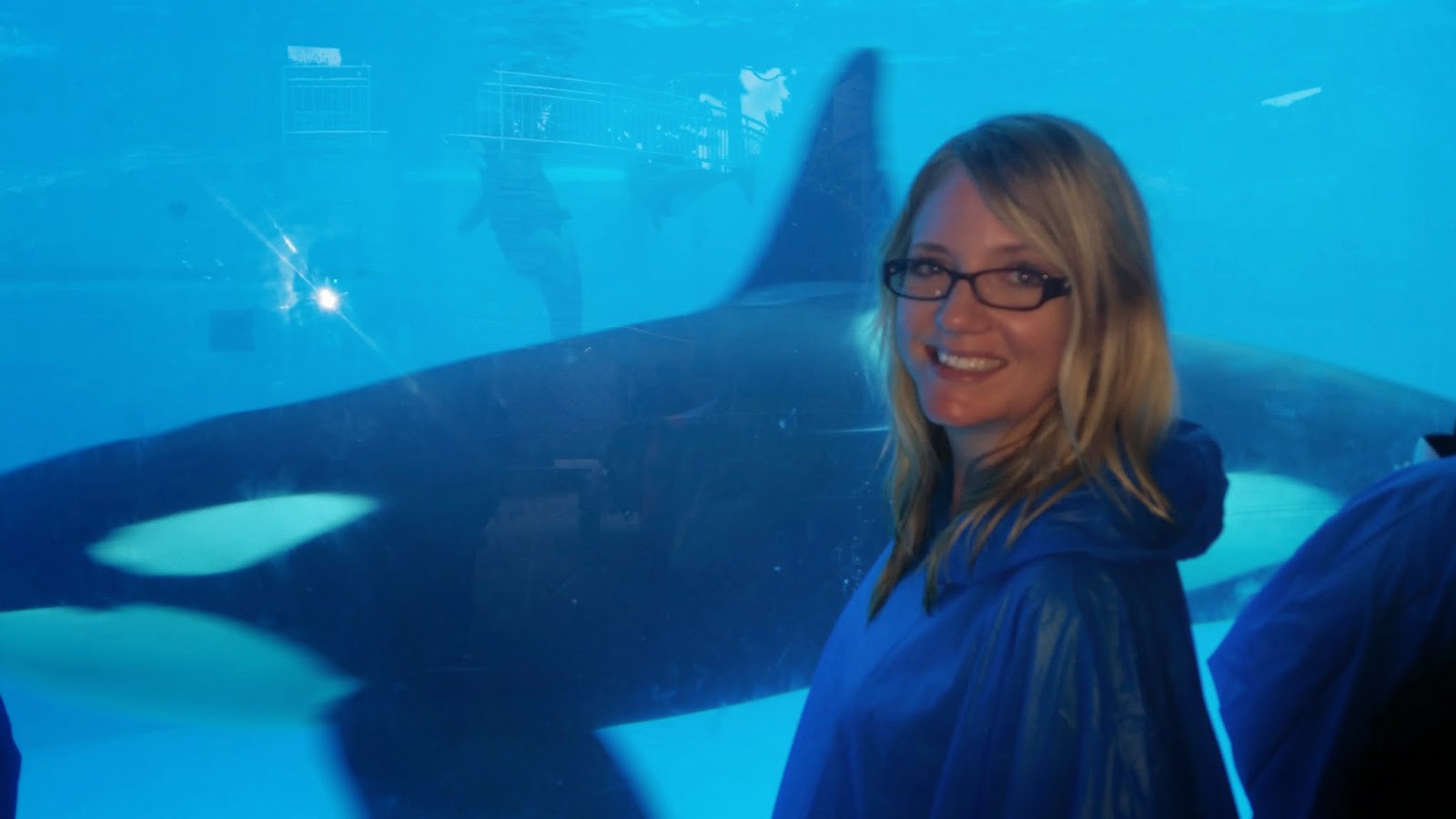 My Killer Whale Photo Bomb. (In reality, this shot took about 10 minutes and several ill timed pictures before we perfectly captured the whale. I tried to do the same for Hubby, but we may have been there all night with my expert photography skills....) 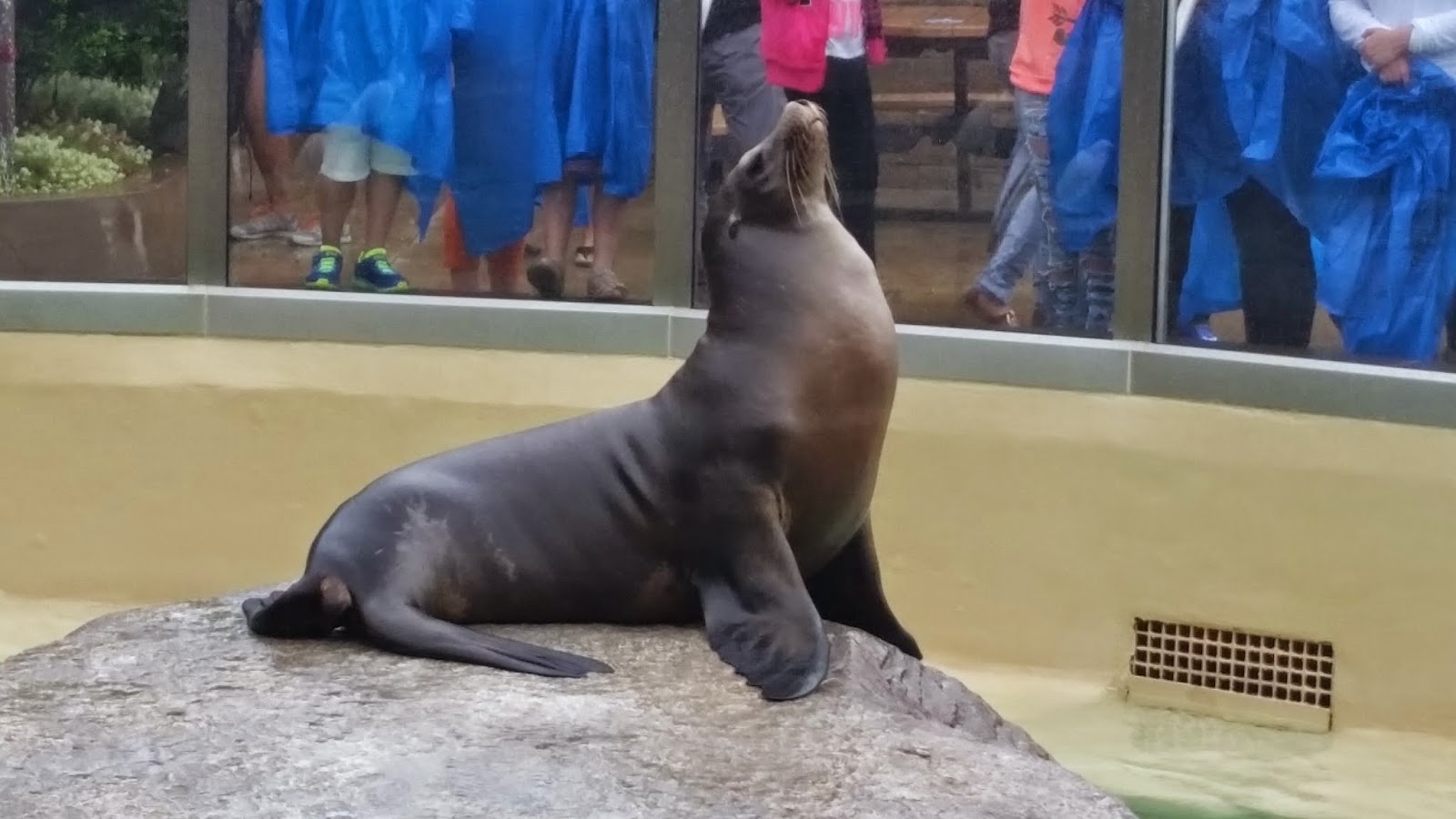 Perhaps I'm a little too obsessed with my dog, but Sea Lions also tickle me to pieces. They're too much. My giggling while admiring these guys may rival the meerkats. Hubby put it, "You missed your calling with animals..." 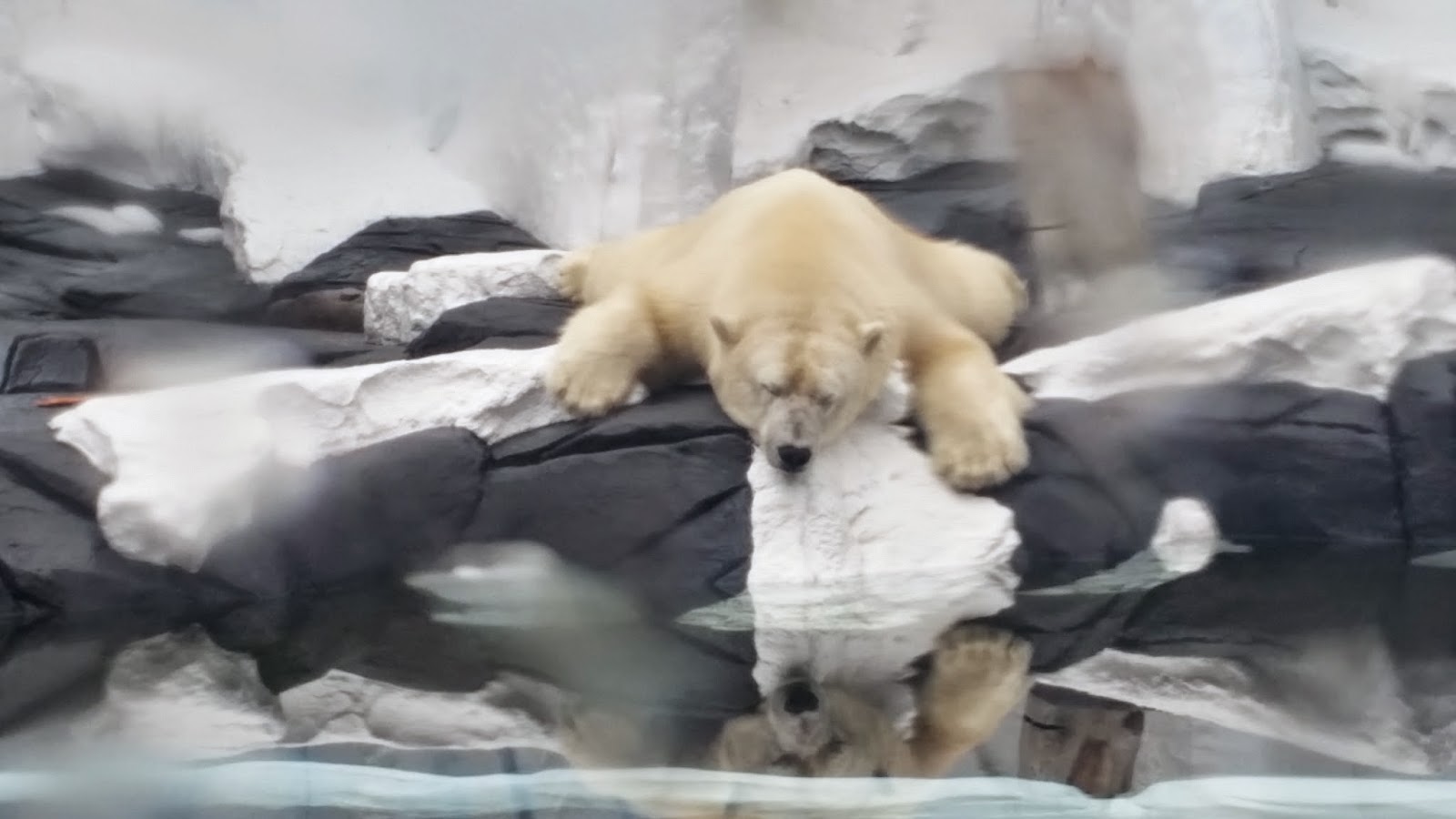 It's my understanding that Polar Bears live in cooler climates. (As is the belief of pretty much everyone else.) So seeing this poor guy, obviously over heated in the 90 degree, extremely humid, weather was a bit disheartening. But I assume those folks at Sea World know what they're doing (?)

The best moment of the day was just before we left. We decided to stop and see the Beluga Whales, the tune of "Baby Beluga" running through my mind the entire time. To our surprise, we witnessed the mating habits, or at least attempted mating habits of an extremely eager gentleman whale and a lady whale who had no intentions of giving it up to him anytime soon. I took a pretty long video of the incident, but am still trying to get it to upload correctly. Stay tuned :)

Overall, I couldn't have asked for more out of this Babymoon. We finally got the real vacation we needed. The food and outings were perfect! But most of all, the company of was husband was perfect :) Now bring on that baby!

All our love,
J, J and Little R