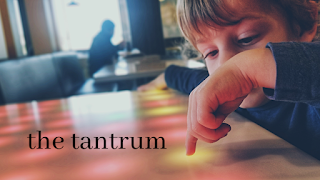 We sat in the middle of the sidewalk, public schoolyard over my shoulder and surrounded by onlooking parents -- all eyes on us. All before 8 am.


Have you every experienced a public tantrum?

My first has always been high maintenance. She demands my full attention at all times. Since day one. She is an actress. But this high maintenance girl has rarely ever had a tantrum. Yes, she cries and cries often, but feelings are something second nature to her. Feelings make sense. Even as a toddler she would cry, regroup and move on in less than one minute.

She is not my tantrum child.

My son is, in his own right, far easier than the little actress. He's easy going, full of kisses and enjoys uninterrupted toy tinkering. But boy can he tantrum. Especially in the last month. And this morning was the biggest, most humiliating, most nerve wracking tantrum I'd ever witnessed.

The tantrum to end all tantrums.

This morning, we woke like anything other day. Dressed, brushed our teeth, sat for breakfast and loaded into the car for the 8 am drop off of my eldest. Everyone in good spirits. As I pulled the car up to the school, my normal parking spot was taken so I parked alongside the opposite side of the street.

This was apparently not the move to make.

The two year old felt very strongly that I needed to move the car back to our regular parking spot, even if the spot was taken. Tears rolled down his face and fell upon his blue shirt as he refused to get out of the car.

Keep your cool, Juels. He'll come around. We still have five minutes to walk up to the school. Change the subject so he forgets why he's upset.

"Do you want your jacket?"

"Do you want me to carry you?

"Do you want to take the stroller?

I pulled the umbrella stroller from the car as he wiped tears from his cheek. Sitting down, he demanded he buckled himself in before walked into the school.

Come on kid, buckle yourself in.

As he managed to buckle in one side, I noticed that the straps were behind him and twisted, making his endeavor entirely impossible.

As the "no" shouted from his lips, the tears joined the party. I glanced at my patient 5 year old, who, with every moment was losing her time on the playground before school.

"Alright, buddy, that's good enough, we have to get your sister to class," I decided and we set off.

Let's take a step back now. Have you ever been the center of attention? Has every single person in a room, or an auditorium, or a gathering ever looked directly at you? All eyes on you? Red carpet treatment?

Well, I'm here to tell you that I walked the red carpet of toddler tantrums this morning as my son wailed in his stroller. Moms and dads dropping off their well-behaved 5 and 6 year old's. Kids, lugging their jackets and backpacks. Dogs, wondering who had brought one of those high pitched dog whistles to the school that day,

All eyes on the mom with the tantrum toddler.

What did I do?

I smiled and said hello to every single person who locked eyes with me.

Listen, I know they were probably not judging me. We've all been there and most of those moms were probably feeling sorry for me at the time.

But in that moment, I felt judged.

As we approached the drop off area, seconds to spare, I kissed my daughter and sent her on her way. Kids rushed into their classrooms and the doors shut behind them. The playground, once bustling with kindergartners, was silent and empty.

My son still cried. In fact, he started crying even more.

At this point, my nerves raced through my body and sweat pearled over my brows. Parents stared as they cleared the campus, loading into their SUV's and minivans. My son sat in the cheap umbrella stroller, red faced and tears streaming. His blue shirt so wet from tears he must have spilled something on it before we left. Surely those couldn't be only tears?

I sat down next to him, ass on the side walk. Parents side shuffled around us.

I felt like crying. I could join in too, what difference would it--

"I don't want her to go to school! I want her home!" he declared.

Have you ever had an epiphany? A moment of realization? Where suddenly it all makes sense? My nerves subsided and embarrassment vanished. This makes sense now. My poor little guy just wants his sister to stay home with him. He misses her. He loves her.

I pulled him onto my lap and wrapped him in my arms. I could feel his short, stuttered breaths on my shoulder. He burrowed his head into my chest and not so subtly wiped his nose on my sleeve. We sat in the middle of the sidewalk, public schoolyard over my shoulder  and surrounded by onlooking parents -- all eyes on us.

"I miss her too, kid," I said. He squeezed tighter and let out an exasperated exhale. The tears had stopped. "You ready?"

It's no coincidence that my daughter's return to school from a three week holiday break coincided with an unbearably steep increase in tantrums.

I decided to skip whatever plans I had for the morning so I could treat my dude to his favorite breakfast-- a mango smoothie and hash brown from McDonald's. And when he asked if we could go inside instead of driving through, I said yes, fully aware of the kick-ass light table inside this particular McDonald's. (The lights on the table change by touch, so you know this is a 2 year old's dream table.)

We spent some time -both- missing his big sissy.

Listen, I get it. Tantrums exist to torture moms. As if uprooting our lives and transforming our bodies wasn't enough, our babies quickly turn into toddlers who have no off switch. The trick during the times of turmoil is to stay calm and remind them that you love them.

All the contradictory parenting literature in the world and here I am a mom just trying to provide what I've learned from my tantrum prone toddler. Here's a little secret, you don't have to listen to it if you don't want to. Choose the advice that fits your parenting style and that makes sense for your family.

Just like my son and I embracing each other on the sidewalk: Pay no mind to the world around you. Listen to what matters. Listen to your loved ones, to your family and to your little one who misses  his big sissy. 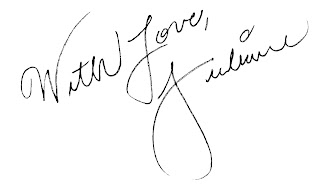 Julianne Haness is a stay at home mom, artist and blogger based in the Los Angeles Suburbs. Follow her on Instagram for daily musings about mom life, Disney life and creative life.